By Lara Petersburg Published December 12, 2013 in the Distilled category

You’ve probably noticed that December is the month for Best of the Year lists, which, for me, truly makes it The Most Wonderful Time of the Year. These lists provide the easiest way to revisit the music you’ve discovered over the past year, as well as catch up on what you’ve missed.

Since 2010, Facebook users have been able to quickly generate year-end summaries of their statuses and photos, and this year, Spotify followed suit with a fascinating, interactive summary of what the most popular music of 2013 was; from the worldwide down to individual user level. Check it out and get your own summary here: Spotify Year In Review 2013

Our Head of Outreach Rob Toledo spotted this awesome tool first, and I immediately pounced on the opportunity to dig into what everyone is listening to at Distilled. Not everyone here uses Spotify, but I got summaries from about ⅓ of us.

Having assessed the results, I’ve come up with a slew of awards for various members of Distilled. The winners are as follows:

Biggest Listener: Video Editor and Animator Margarita Iosif wins this title by a landslide, with 97,677 minutes of listening - that’s 1,628 hours! She also wins Most Loyal Fan of both her favorite artist, Archive, with 1,848 streams of their music this year, and Most Loyal Fan of her favorite album, Tribes’ Wish To Scream, with 914 listens. Margarita also dominates the Most Number of Shoes Owned at Distilled category, but that’s another story.

Most Consistent: This one’s a tie between Content Strategist Hannah Smith and our COO, Rob Ousbey. Every single category of Hannah Smith’s data was topped by Alt-J. As she put it, “Apparently I only listen to Alt-J...”

Rob came close to this feat: His most-listened-to artist, album, and all of his top 10 tracks are Caspar Babypants. Caspar Babypants is a children’s music artist who used to be in the Presidents of the United States of America. Rob blames his results on his 1-year-old son, who listens to the album at least once a day, but we all know the truth.

Most Appropriate Top 10 Song: Our Content and Community Manager extraordinaire Chéri Percy wins this one with her #2 most-listened-to track, “Beat Your Heart Out” by - wait for it - The Distillers. I see what you did there, Percy.

Highest BPMs: Our Head of Consulting Ron Garrett claims this honor, which shouldn’t surprise anyone who knows him. Ron fulfilled a longtime dream this year of attending Tomorrowland, a large electronic music festival held in the town of Boom, Belgium, no joke. Even the paragon of professionalism and dedication (which Ron totally is) needs to let loose every now and then.

I’ll Start My OWN Playlist! With AlunaGeorge! And Little Dragon!: Senior Designer Leonie Wharton is well-known within Distilled for her fabulous taste, which extends to the music realm as well: She played her self-made playlist “leonie-rave” no fewer than 3,679 times. The woman knows what she likes!

Surprisingly Gangster: PR Consultant Britt Klontz. If you need proof that Britt is The Sweetest Person Ever, I refer you to 1:05 in the below video:

Then contrast this with the fact that her 2013 stats are made up completely of A$AP Rocky, Jay Z, Prof, and The Game. I did not see that coming.

Loves Their Top Song The Most: Principal Consultant Kate Morris listened to a song 125 times this year to get amped up for her many client meetings and conference speaking appearances. You may have heard it: A little ditty called “Can’t Hold Us” by Macklemore & Ryan Lewis.

Macklemore & Ryan Lewis were also the most-listened-to artist on earth in 2013: 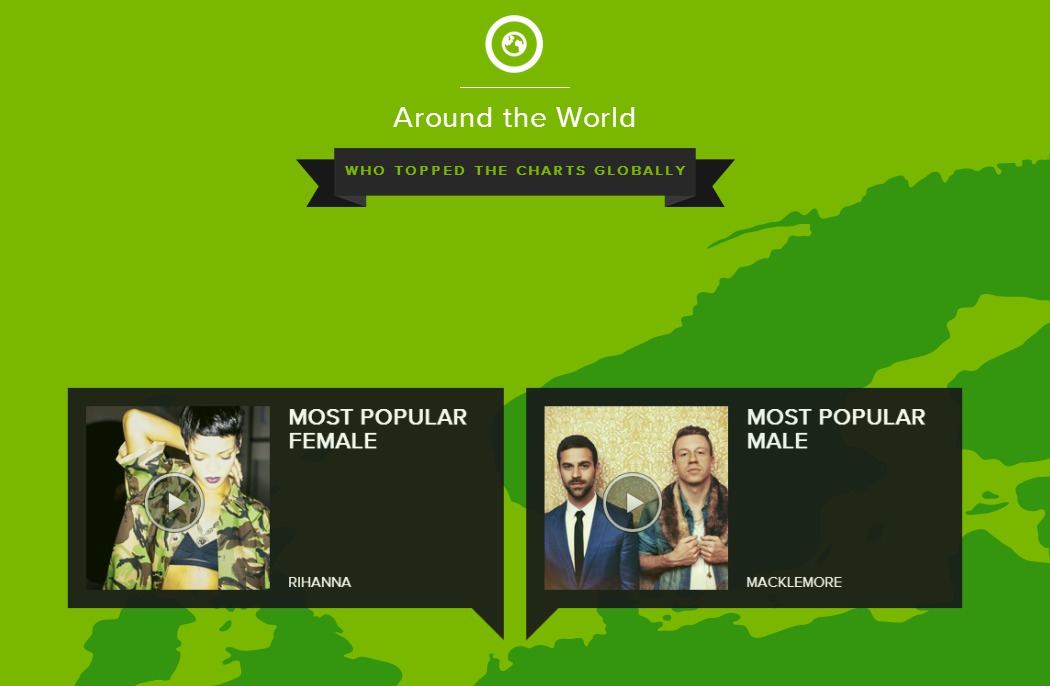 (Honorable mention to Toledo, who was barely nudged out with his 124 listens to LCD Soundsystem’s “Yr City’s a Sucker”.)

Most Likely To Own A Banjo With A Handmade Strap: Data Journalist Volodymyr Kupriyanov. VK explains that he switched to Google Music quite a while ago, so his stats aren’t fully representative of his listening habits, but still, there’s a loooot of The Lumineers and The National in there. Shelley Wilson has a fair number of Mumford & Sons listens as well...

Prettiest Collection: Senior Consultant Mike Tekula. The more I learn about Mike, the surer I am that he’s a secret Renaissance man. Not only is he a fantastic consultant, he’s a gentleman, a scholar, an outdoorsman, a good drinker, and a connoisseur of instrumental music, apparently! Mike’s #9 most-listened-to song this year was Fleet Foxes’ “Blue Ridge Mountains”, which, for my money, is one of the most beautiful songs ever.

Biggest Headbanger: London Office Manager Cheney Houseman. Cheney may have missed her calling as an alt-rock DJ, as her Top 10 is made up of tracks from Two Door Cinema Club, Rage Against the Machine, Modest Mouse, Interpol, and Foo Fighters. Rock on!

The One Person I Know Who Apparently Liked Yeezus: Graphic Designer Matt Mitchell-Camp. He streamed it 105 times in the 6 months since it’s been out. This earns him a spot with Britt in the “Surprisingly Gangster” club.

Most Confusing Results: Founder and CMO Will Critchlow. Will’s Top 10 Tracks list is mostly populated by Dire Straits, with a little Markus Schulz and Ratatat in there for variety. Although he doesn’t recognize his #1 track. Will’s take: “What a strange collection I have. I think I must have left something on repeat at some point!”

Why I Think Either Lynsey Little Or Vicke Cheung Is A Braggy McBraggerson: The London office as a whole uses Mark Johnstone’s Spotify account, and his #8 most-listened-to track was the quintessential Hawaii song: Israel Kamakawiwo’ole’s “Somewhere Over The Rainbow”. Vicke and Lynsey are the only Londoners who visited Hawaii this year. Things that make you go hmmm. (Or maybe it’s wishful thinking for sunshine?)

Claims He’s “Old” But Whose Top 10 Is Pretty F*!$in Awesome: Head of Paid Search Richard Cotton. As he says, none of it is from this century, but damn, what a list! There’s not a dud in the lot!

4. Spacehog - In The Meantime

And since I’ve poked fun at my colleagues (including one of our founders and someone who can fire me - yikes!) it’s only fair that I lay my cards on the table. Here’s what I listened to most this year:

How Classixx’s “Hanging Gardens” is not on here is beyond me.

So tell us: What were your top artists, albums, and tracks of 2013? What’s your take on the stats in Spotify Year In Review 2013?

And if you like what you’ve seen and heard here, I’ll be putting together the music for our next conference, SearchLove Boston in April 2014. Come rock out with us!

Feel free to check out my music blog or follow me on Spotify and judge away, although I keep my Katy Perry jam fests in Private Sessions. I mean, I have a reputation to maintain. ;)